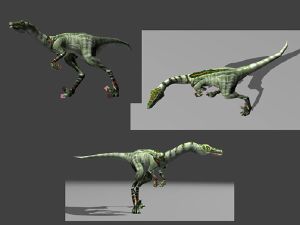 Troodon was a small omnivorous dinosaur whose remains have been found in North America. Troodon is the type species of Troodontidae, the sister clade to Dromaeosauridae within Deinonychosauria, which makes Troodon a relative of Velociraptor, Utahraptor and Archaeopteryx. It has one of the highest known brain size-to-body mass ratios of any dinosaur. Troodon had very large eyes meaning it may possibly have been nocturnal. Troodon is present in Primal Prey.

In Primal Prey, the Troodon is a small and cunning predator. It is the smallest dinosaur in the game, so it hunts in packs to take down larger prey. A pack of Troodon can be a nuisance, but with proper evasion techniques they can be dealt with. They often attack with a group of Utahraptor, possibly hoping to scavenge off the larger predators' kills. A Troodon can weigh anywhere between 60 and 80 lbs, and a mere 76 lbs will earn a star in the trophy room.