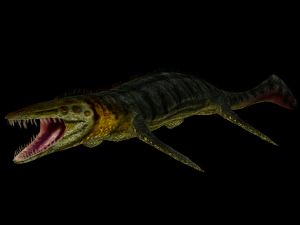 The Tylosaurus was an aquatic reptile that roamed the prehistoric seas of FMM UV-32.

The Tylosaurus are one of the few known aquatic animals on FMM UV-32 unexplored seas. From what is known during the Crater City Incident, the Tylosaurus is not aggressive towards humans. Because of this, it is theorized that Tylosaurus eats smaller fish or other small animals rather than things human sized or larger. It has a strange yellow coloration around its throat and a slight resemblance to the Suchomimus with its dark green crocodile-like texture.

In Carnivores Cityscape, the Tylosaurus can be found swimming around in rivers and sewers. As they cannot travel well out of water, it is unknown how they got into the sewers from the rivers, or even out of the ship.