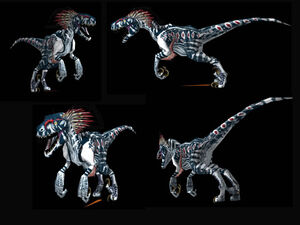 Utahraptor is a dinosaur in Primal Prey. It is the largest known member of the dromaeosaurids, a family of dinosaurs commonly known as "raptors." It is a medium-sized carnivore from the early Cretaceous. It had the capability of taking down large herbivores in packs of 2-3.

In Primal Prey, Utahraptor is a dangerous dinosaur that usually travels in groups of three, consisting of one male that appears to lead the pack and two females. They hunt and ambush the player, as well as other dinosaurs, occasionally with a pack of Troodon. Aside from the player, their favored prey seems to be Lambeosaurus and Styracosaurus. Despite how dangerous they can potentially be, Utahraptor often seem rather cowardly, and will flee after several shots from a weapon. However, they often come back later on for another attack. It is possible that the rationale for this behavior is that the raptors only inflict several wounds at a time and then flee to avoid injury, waiting for the prey to die from shock and blood loss. A Utahraptor can weigh anywhere between 400 to 600 lbs, and 560 lbs will earn the hunter a star in the trophy room.