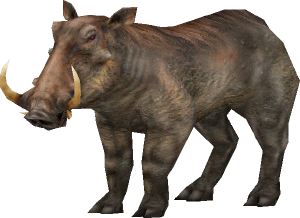 The wild boar is a modern day animal found throughout Earth. It is a pointable animal in Carnivores Ice Age and Carnivores: Ice Age.

In Carnivores Ice Age, the wild boar is the second animal available to hunt. It will attack the hunter if wounded or cornered, then it impales the hunter and shakes him around on its huge tusks. Similar to the case between Gallimimus and Velociraptor, the pig could be mistaken for the wild boar, but not as likely as the animals mentioned before. It is easier to tell them apart at a distance due to the large difference in overall size and skin color. It is also the only modern animal available to hunt, with the unconfirmed Yeti as a possibility.