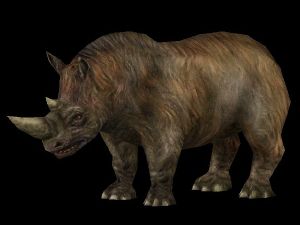 The woolly rhinoceros is the fourth animal available to hunt. It is dangerous when cornered or surprised, and will gore any hunter that gets too close with its sharp horns. It is also commonly seen while not being hunted. It can be mistaken for the Brontotherium at long distances. Its call sounds sound like a combination of a roar and a cow's moo.