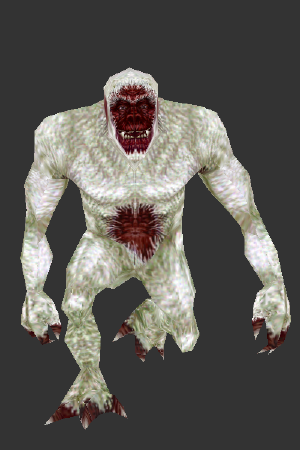 The Yeti is an ape-like cryptid beast that is said to inhabit the Himalayas. It is a pointable animal in Carnivores Ice Age and Carnivores: Ice Age.

The Yeti is the final animal to be unlocked in Carnivores Ice Age, kept hidden as the "secret animal" or "Bonus" until the player earns 1000 points. Despite the fact it is seen as the most dangerous animal in the game, in the original PC version it is very shy and mindless, and will run away at extreme speeds if the player is detected at a distance. The Yeti kills the hunter by grabbing his legs and repeatedly smashing him against the ground. It is incorrectly given the stats of the Tyrannosaurus on the hunt menu. The Yeti also has a similar AI and same call as the bear. This could indicate it may have been a late addition to the game. The Yeti has white fur and red skin.

The Yeti's idle animations consist of it crouching and scratching its hindquarters then sniffing its fingers afterwords and it beating its chest like an ape and raising it's arms. When wandering around the map, it will use the stereotypical Sasquatch walking pose with it swinging its arms by its side and walking in an almost stealthiest looking movement. When it notices the Hunter, it will run away on all fours using its long arms to move much faster.

In fact, when running, it tends to never let its feet touch the ground and leaves most of the work to its powerful arms and hands. The Yeti's speed is so great that it is able to scale many mountains and other obstructions relatively easily. Like most of the dangerous animals in Carnivores Ice Age, the Yeti doesn't like going into the water but may occasionally pursue the player in the water if close enough.

The Yeti is much more aggressive in the iOS version, running towards you at the sound of a gun shot, even at long distances, making more of the them in an area a threat. In fact, this makes it the only animal that is truly "Extremely dangerous!" as the bear and the mobile version of the Smilodon are not so much so, and the second-most aggressive animal in the mobile ports, only behind the Tyrannosaurus. As of update 1.8.0, the Yeti's calls are now more apelike instead of it using the bear's calls.