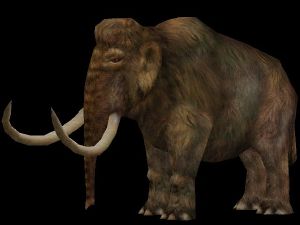 The mammoth was a genus of pachyderms that lived during the Ice Age. There were many types of mammoth that ranged in size from as tall as a giraffe to as short and plump as a pig. The species appearing in Carnivores Ice Age and Carnivores: Ice Age is a woolly mammoth, a species covered in coarse hair that lived throughout the Northern hemisphere during the Pleistocene. Mammoths were similar in shape and form to modern elephants, but most species were larger, with longer tusks and smaller ears, and often a shorter tail.

The mammoth is the largest and most easily recognizable animal in Carnivores Ice Age. It is available to hunt after earning 300 credits, and will use its trunk to smash unwary hunters. The mammoth's killing animation is vaguely similar to the Tyrannosaurus one, swinging the hunter side-to-side then smashing the hunter into the ground.

The mammoth is very slow and large, making it a good target for more powerful weapons. Often, if using a stronger weapon, the mammoth can be brought down while charging. However, it is still dangerous at closer ranges so the hunter should still be careful. When a mammoth is charging, the telltale signs to listen for are large tremor-like sounds. Despite their size, mammoths can be easily brought down with a rifle with just four shots.

The FMM UV-32 woolly mammoth is an enormous herbivore and can grow up to 36 feet long; so large that's its nicknamed "King of the Ice Age Winter" in-game. In fact, it is the is the largest animal of FMM UV-32's polar region and the fourth largest inhabitant of the planet after Brachiosaurus, Giganotosaurus, T-Rex, and Stegosaurus. It has long, curved tusks that are mainly used as defensive weapons especially when wounded. The mammoth has a dense coat of brown fur to insulate it in the cold taiga of FMM UV-32's polar reaches. It has small ears, a short tail, and a long trunk used to uncover vegetation hidden beneath the snow. Mammoths communicate using an elephant-like trumpeting call, but when aggravated or in pain they produce a loud, moaning bellow.